The U.S. Constitution – The Complete Class

This is the highly acclaimed Constitutional class taught by author and scholar, Michael Badnarik. In 6 hours, Michael covers far more than you learned in years of high school or college, in a way you’ll never forget. It includes some of the fundamentals on our rights and the foundations of our republic. The course has been broken up into its primary topics for bite sized learning. We have also included the Mp3 of each section of the class in Mp3 format in each respective section.

Mr. Badnarik’s newest Constitution class is now available on 6 DVD’S along with his book GOOD TO BE KING. They are available at his website: www.constitutionpreservation.org For those who want a THOROUGH understanding of the American Constitution and our Nation, this is a must have for your personal library.

NOTE: You are highly encouraged to watch the first 3 videos: Rights vs. Privileges, Sovereignty, and Forms of Government before progressing to where the Constitution is covered. Mr. Badnarik’s class builds on itself so, an explanation further in the series might not make sense without the supporting information. 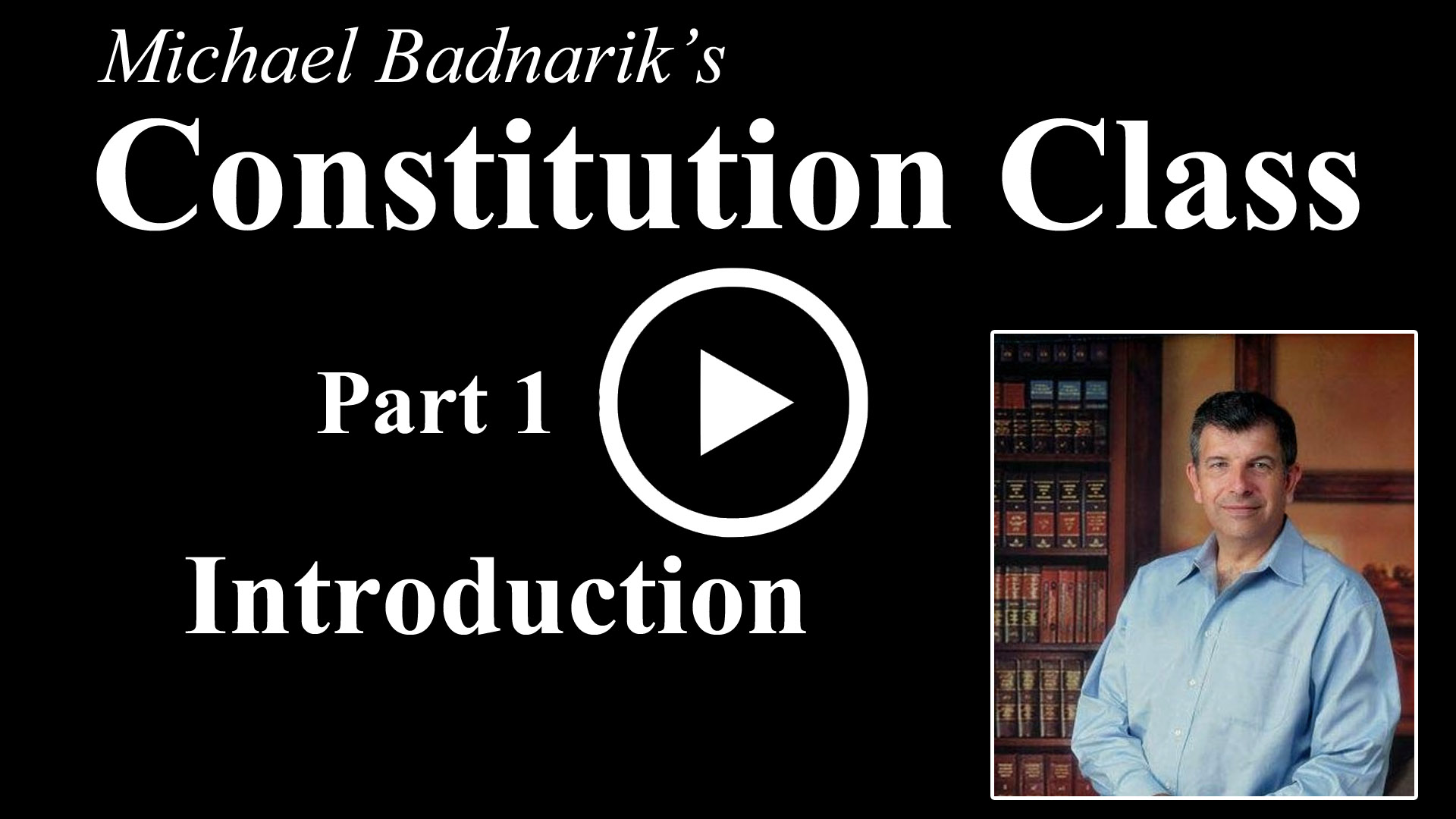 This is the introduction to Michael Badnarik’s Constitution class that has been given to many with a thirst for knowledge for liberty and an understanding of their country’s founding document. 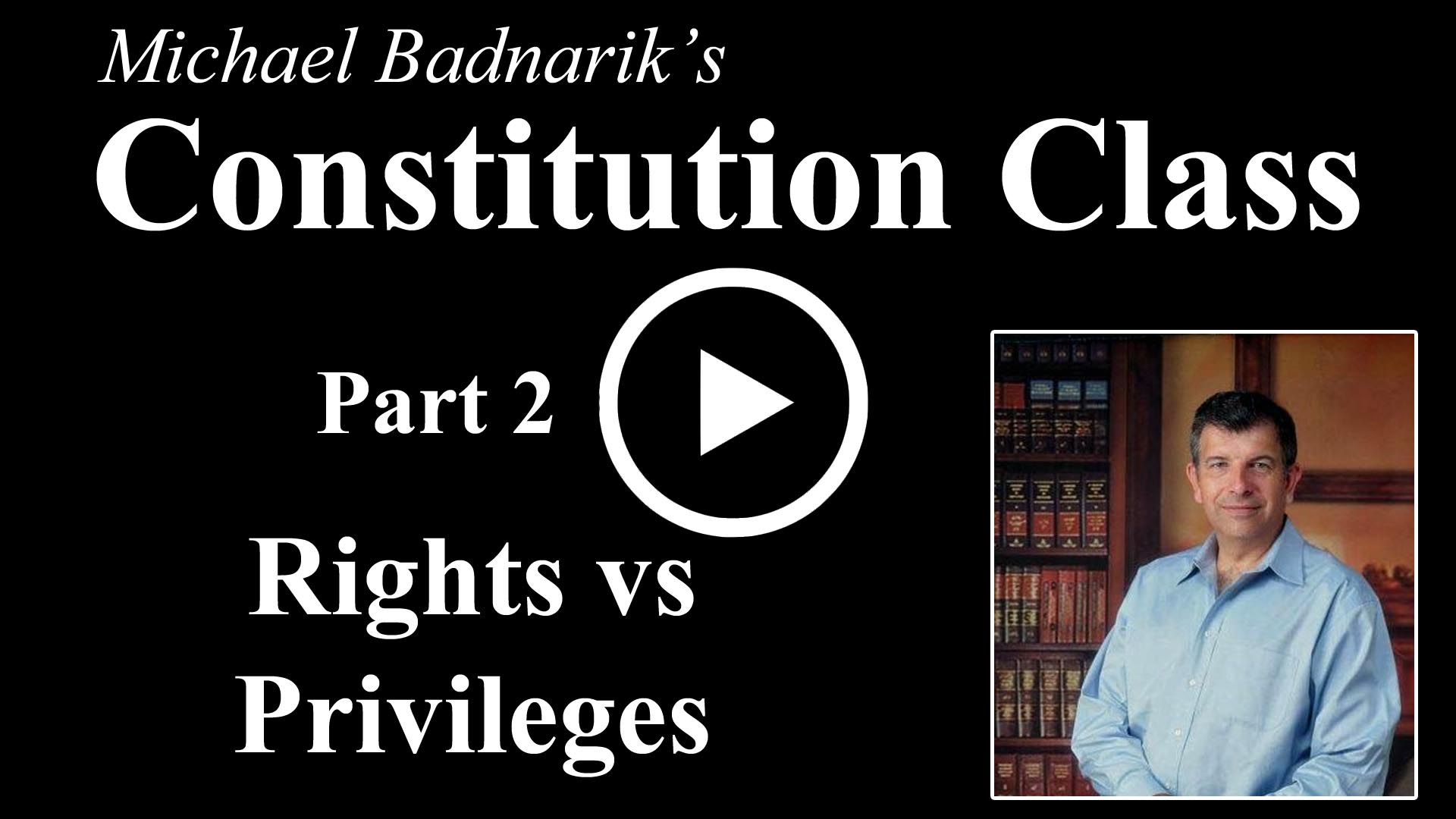 To discuss the Constitution or the Bill of Rights for that matter is pointless without first understanding the difference between Rights and Privileges. Most, if not all, of the problems and issues we have here in America is due to the misunderstanding of what “rights” are. Mr. Badnarik gives a thorough explanation of rights versus privileges and the responsibility that accompanies them. 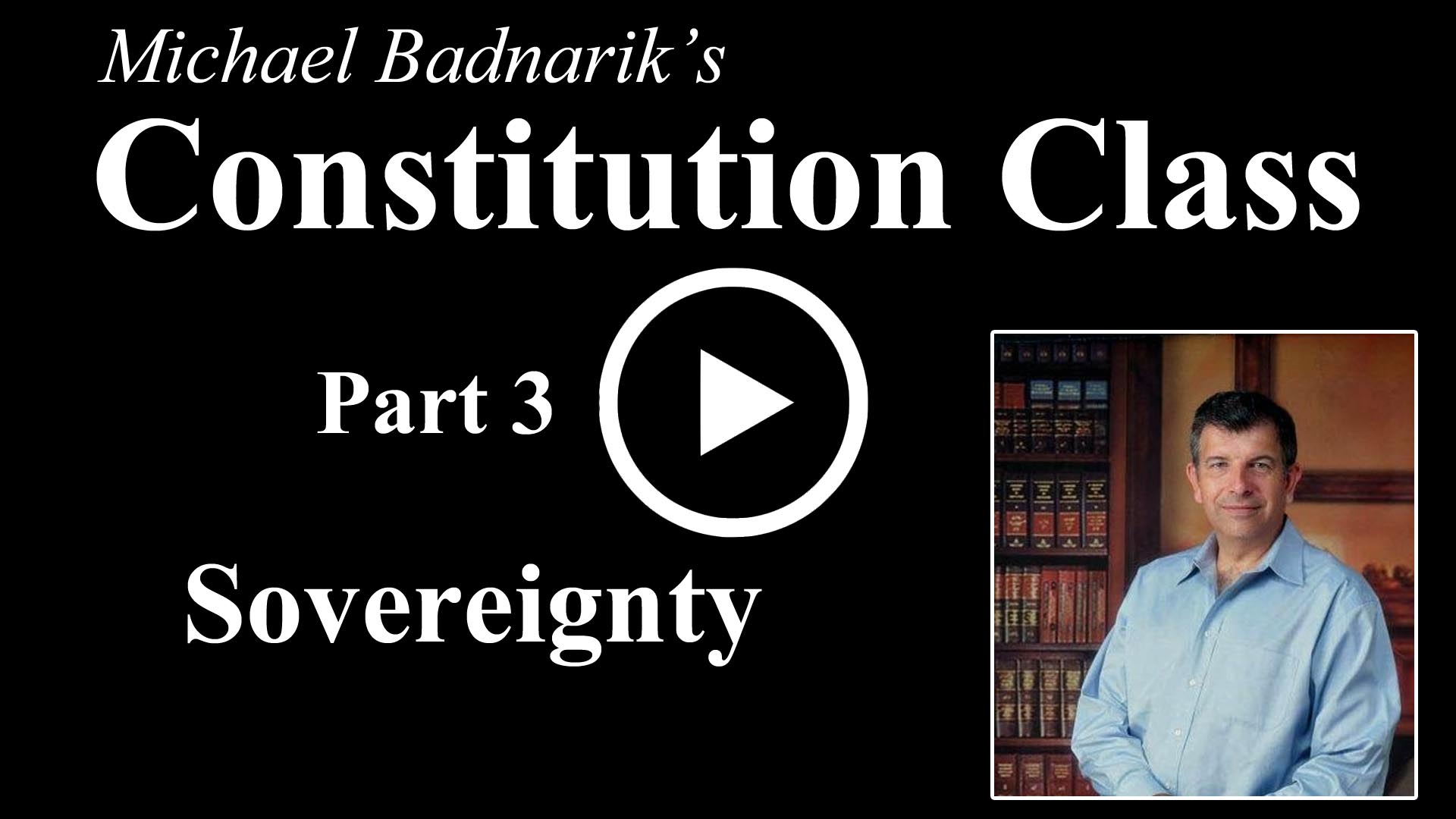 Sovereignty. Not a term that is used much in our daily lives but, to understand sovereignty is to understand what it is that makes America great! Sovereign was the term used for the king or the lord of the land. You pledged your fealty to your sovereign and looked to him to make your decisions and obey his commands. This was the old European model of how things worked. America was a brand new concept of individual sovereignty. No longer did you owe your allegiance to a king. Now, you WERE your own king. YOU got to make decisions that affected you. YOU got to choose how things would happen in your own life. 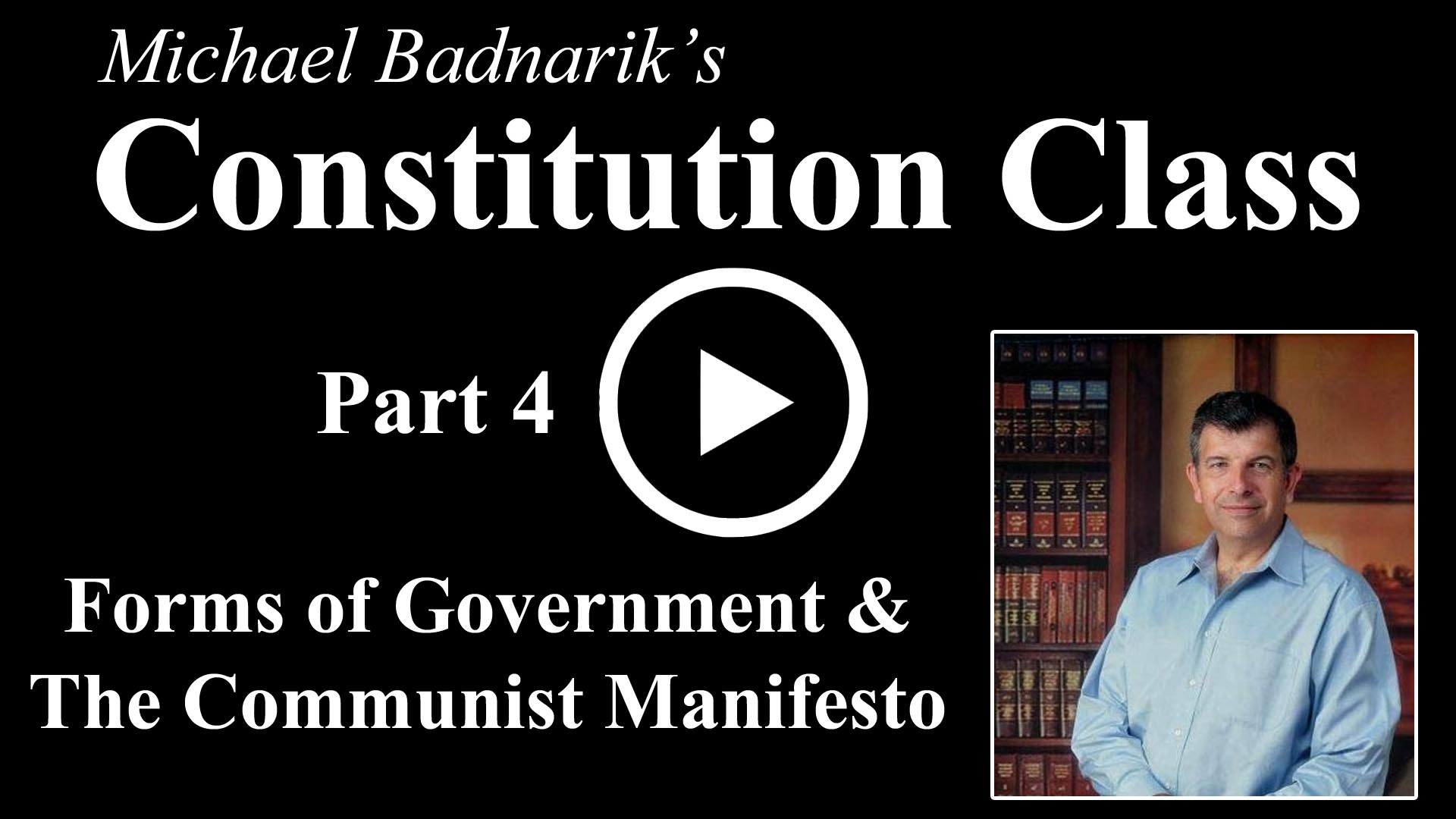 Mr. Badnarik explains the different forms of government and the Communist Manifesto which, surprisingly, has most of its planks in place, here in America. 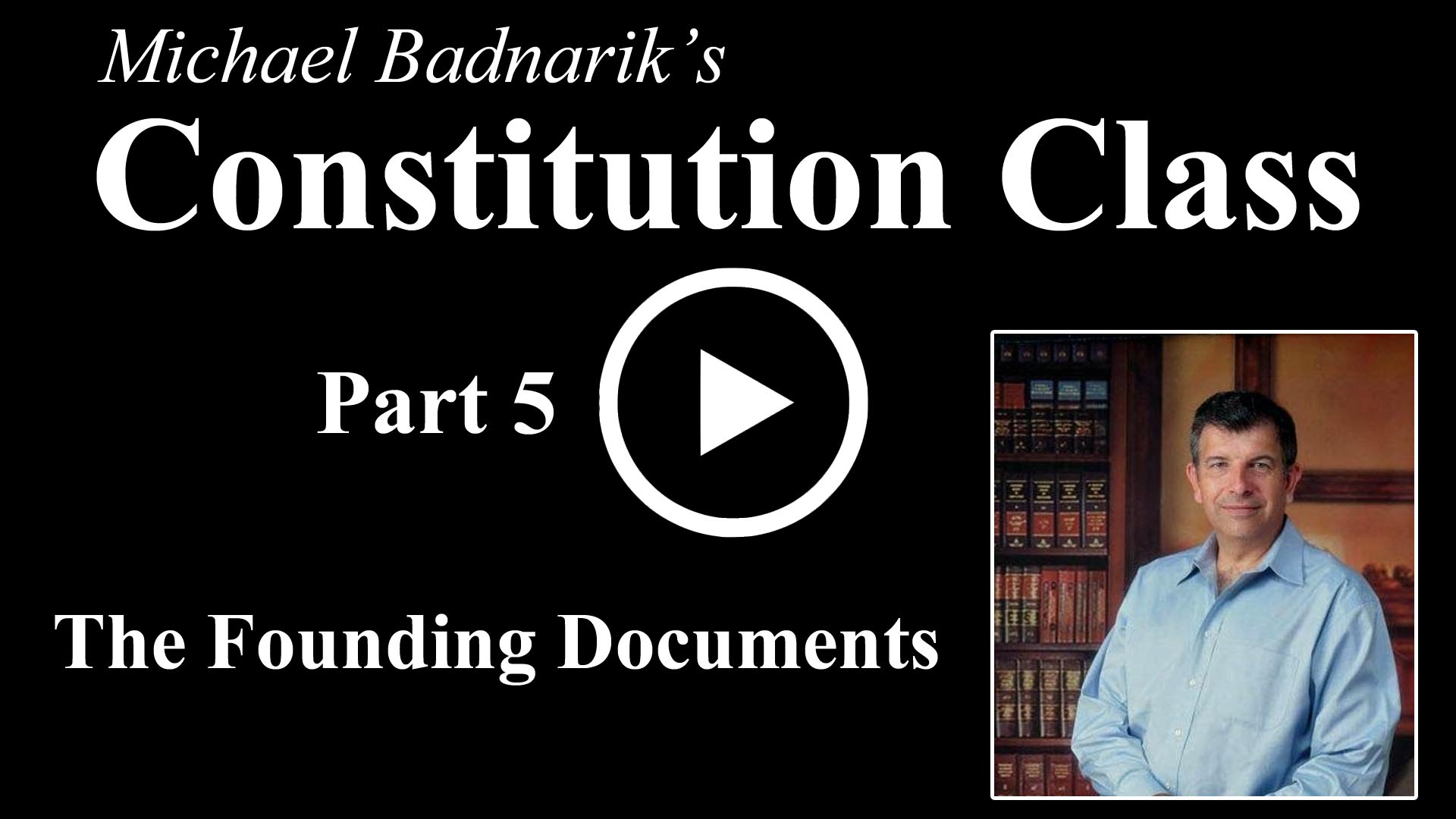 Mr. Badnarik gives some background history on our founding documents and the political atmosphere during the time of their inception. 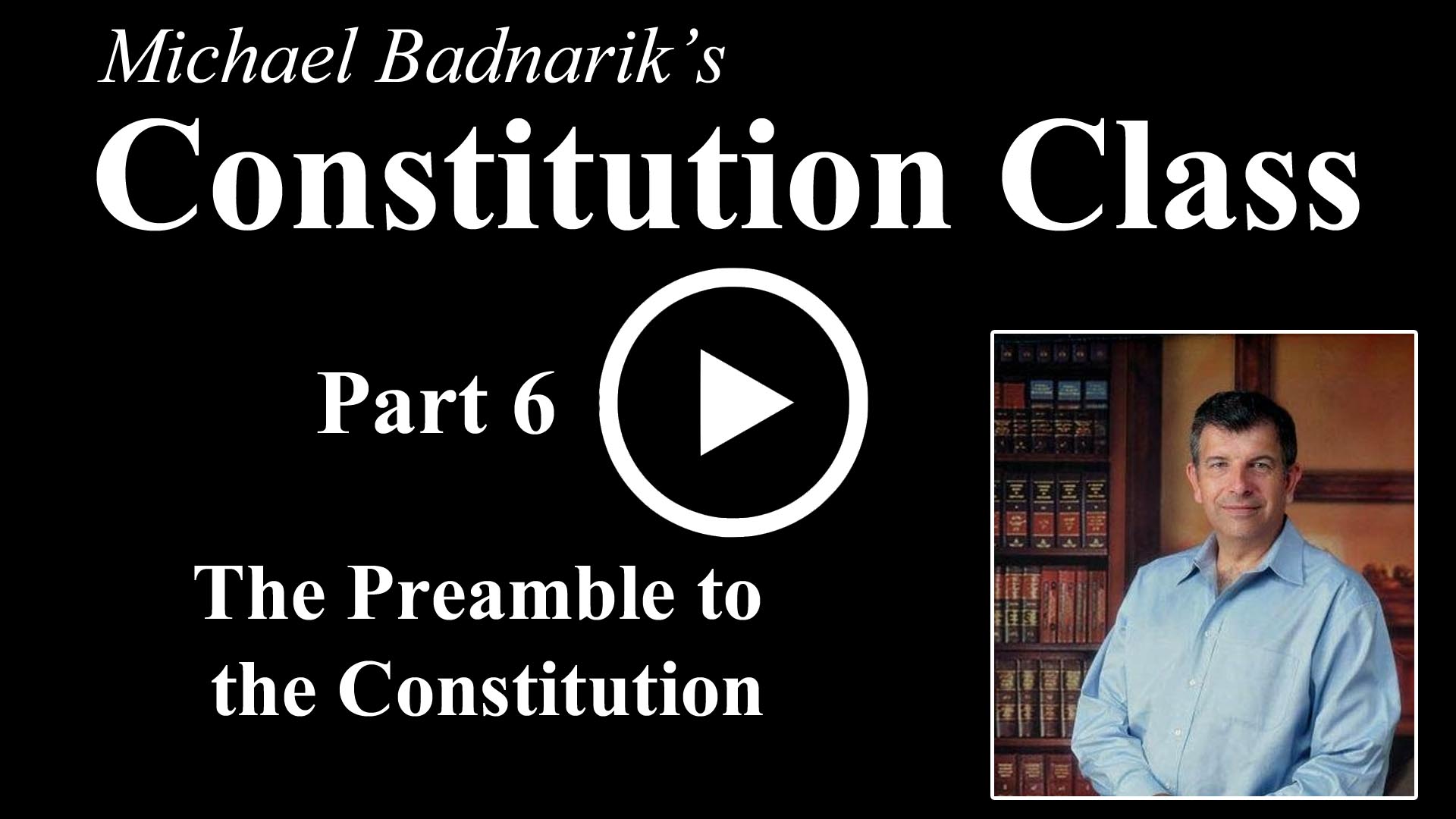 Part 6:  The Preamble to the Constitution

Part 7:  Article I – The Legislative Branch

Mr. Badnarik explains the role of Congress in making our laws and affecting our lives and how most of what they do is unconstitutional.

Mr. Badnarik explains the role of the President and how many of the actions that are taken by this branch are unconstitutional.

In this section, Mr. Badnarik explains the role of the Supreme Court and the different classes of law. The classes of law is an important topic, as many people do not understand which laws they are subjecting themselves to when they engage in certain activity.

In this section of the Constitution Mr. Badnarik outlines the relationship between the Federal Government and the States and also explains citizenship.

In this section Mr. Badnarik outlines the procedure that our founders put down for us to change any part of the Constitution. 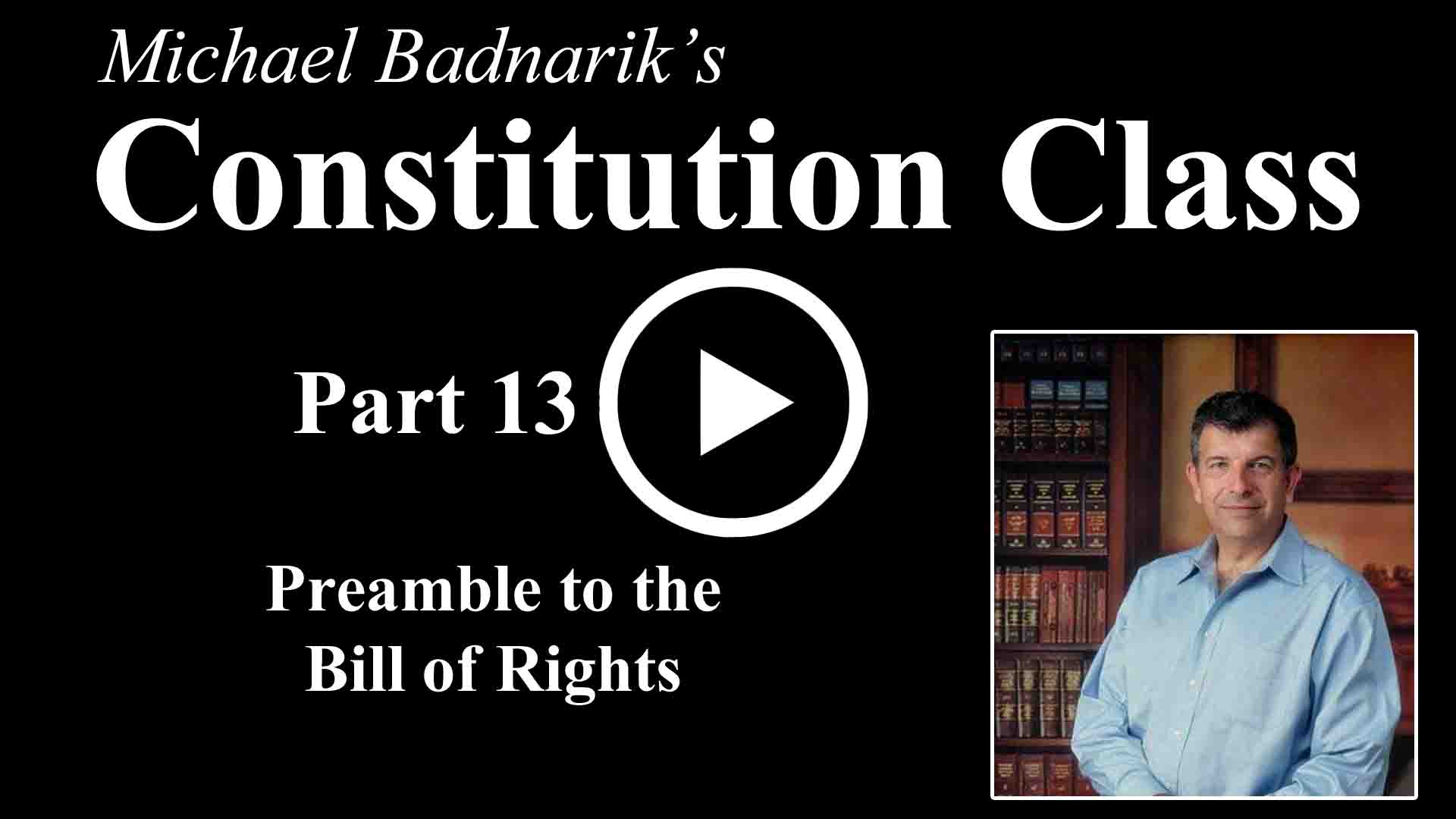 Part 13:  Preamble to the Bill of Rights 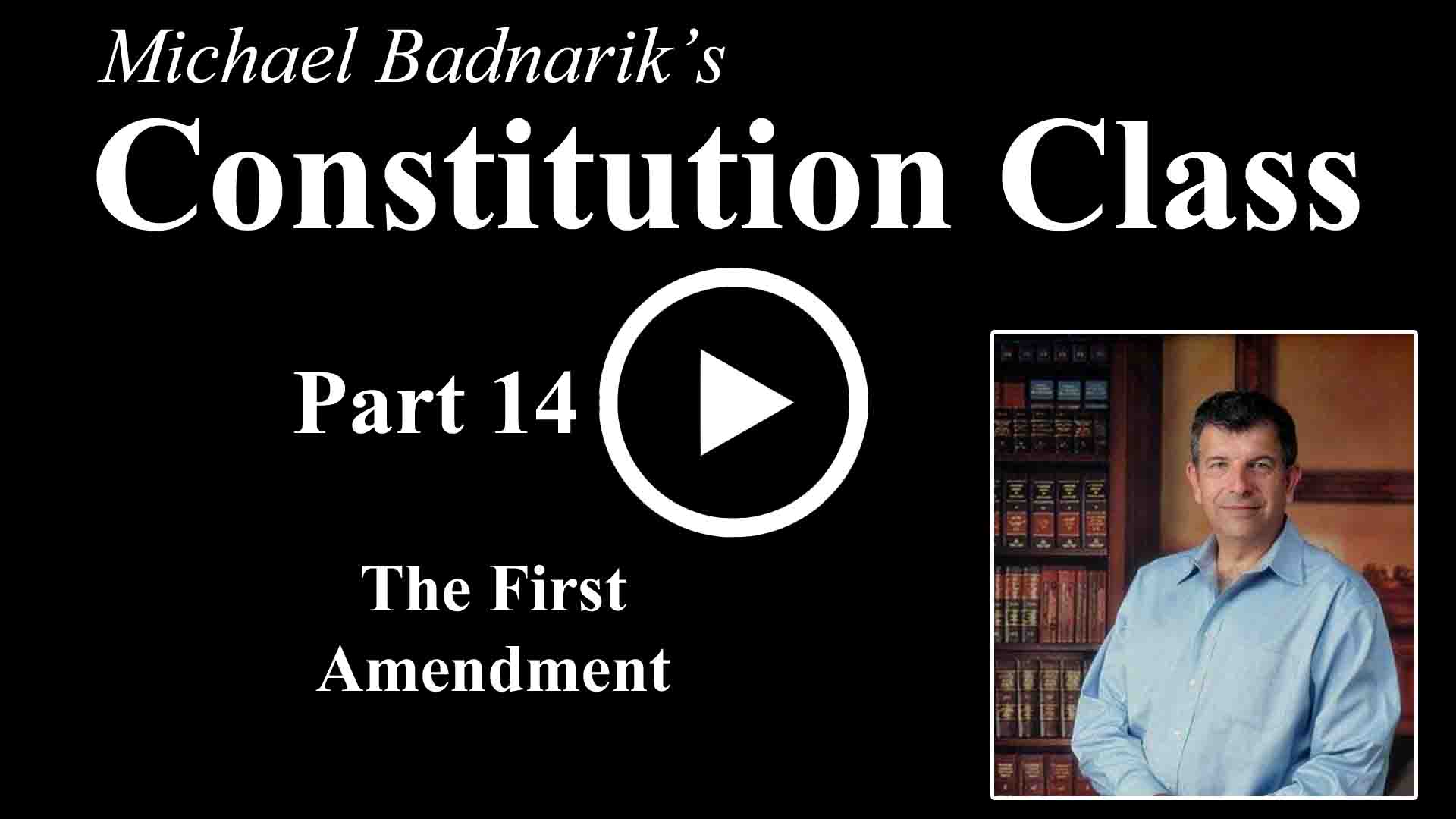 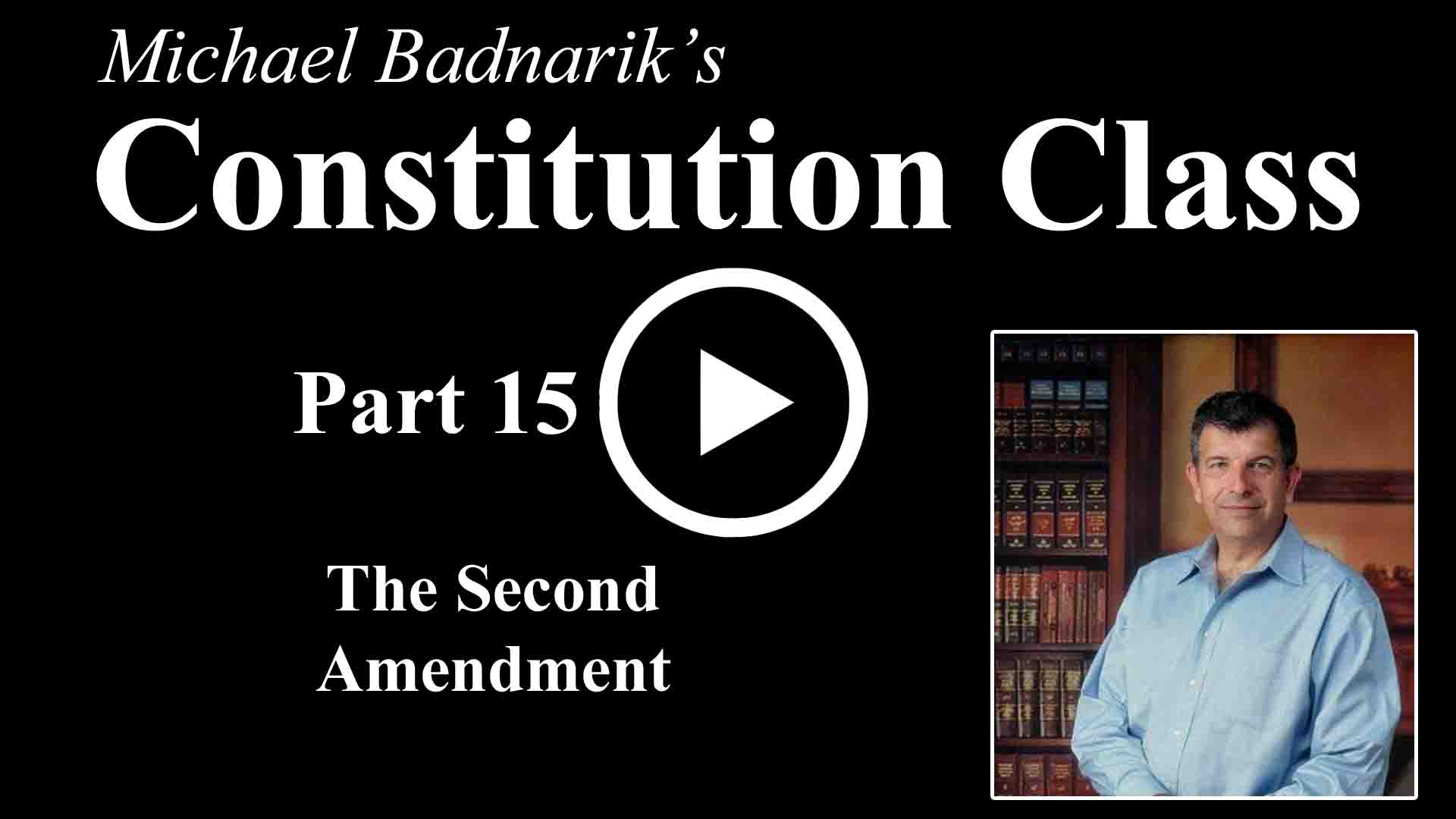 The Second Amendment covers the Right to Keep and Bear Arms and the Regulation of the Militia. 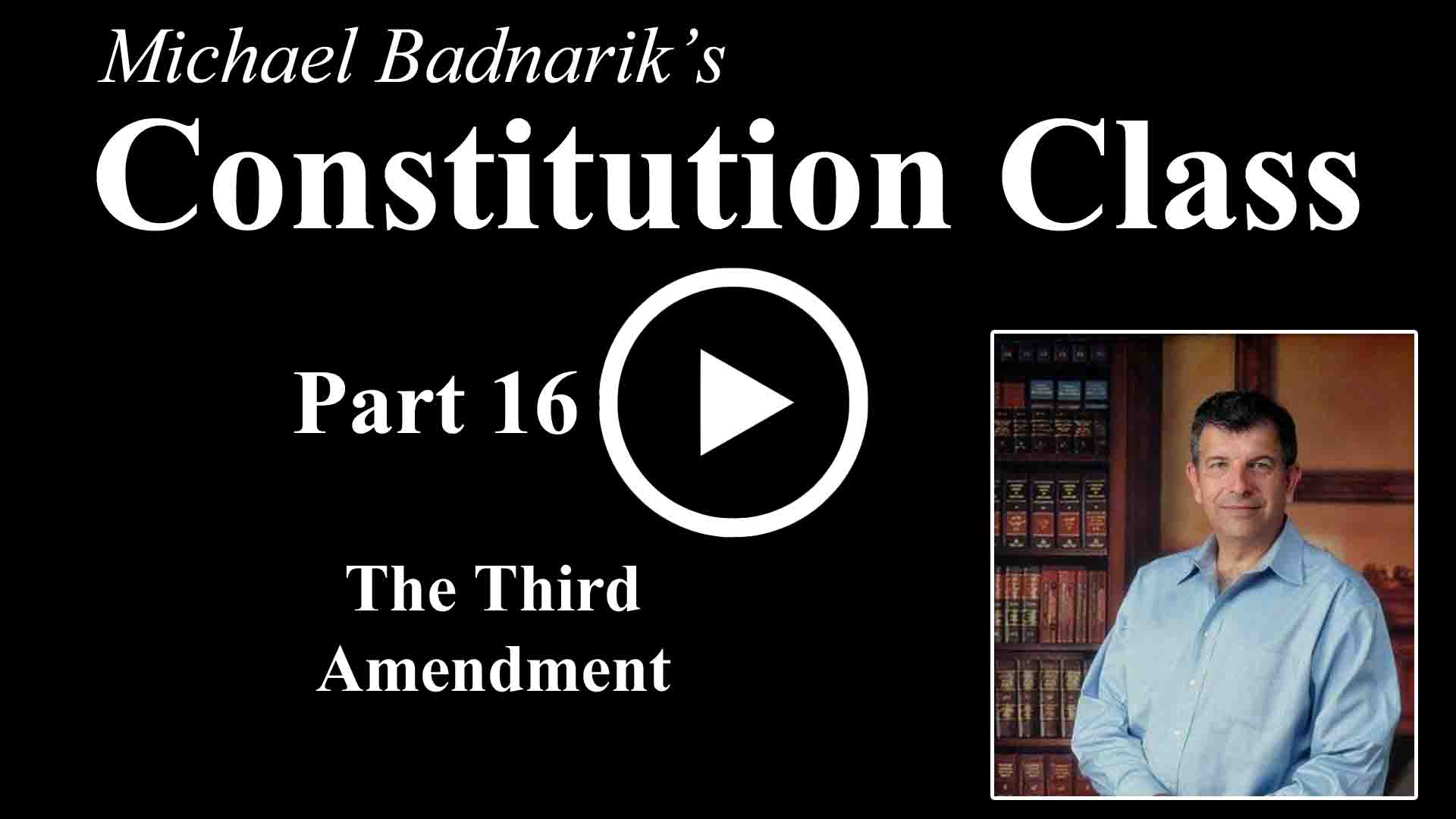 The third Amendment covers how people do not have to house soldiers. 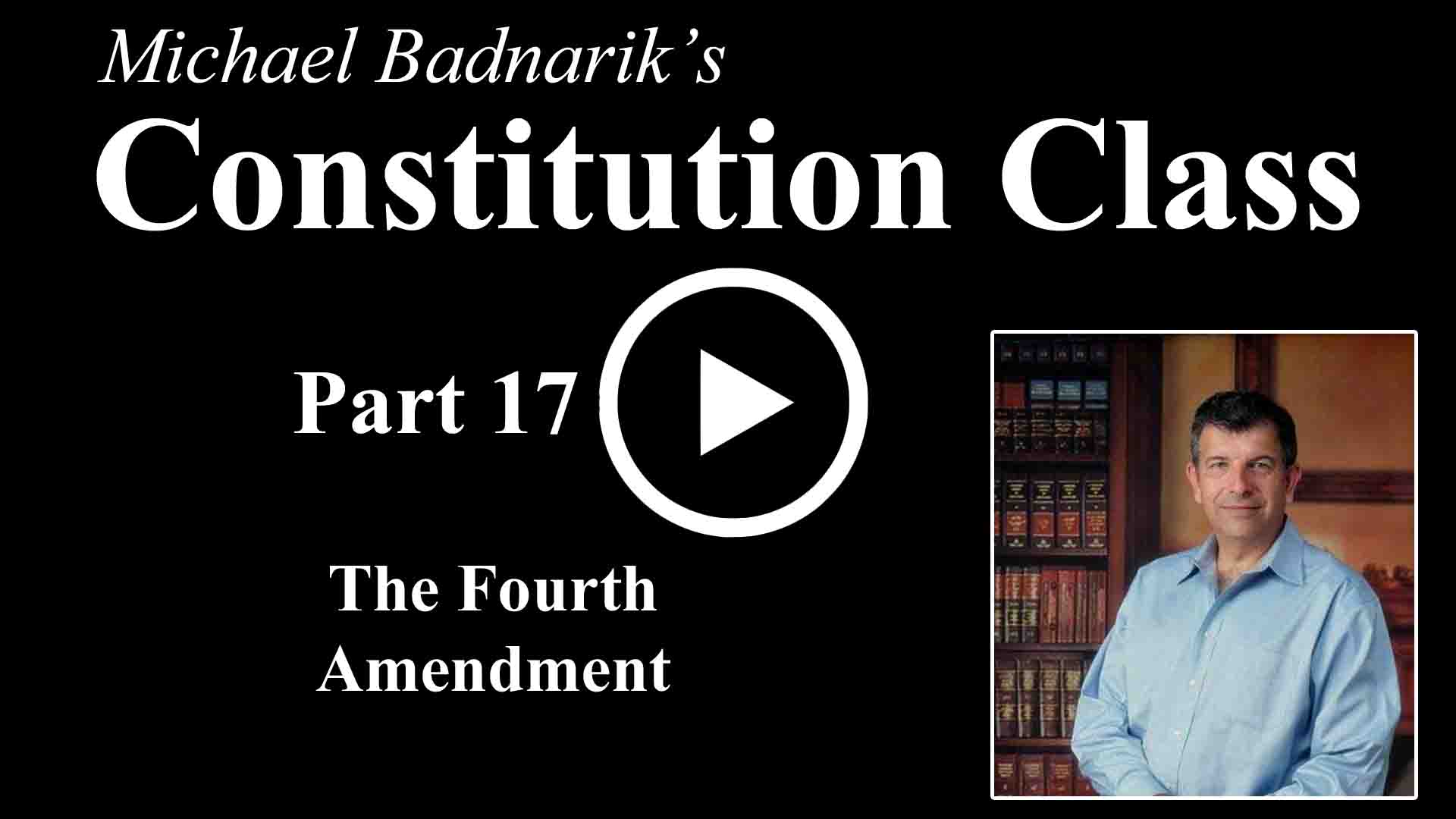 The Fourth Amendment is a VERY important amendment and one that is violated routinely in our modern society by police and federal agents. It is the right of no unreasonable searches or seizures. The Patriot Act is in direct violation of this right by granting federal officials “warrant-less” searches/seizures and “warrant-less” wiretapping ability. In this section, Mr. Badnarik explains this amendment. 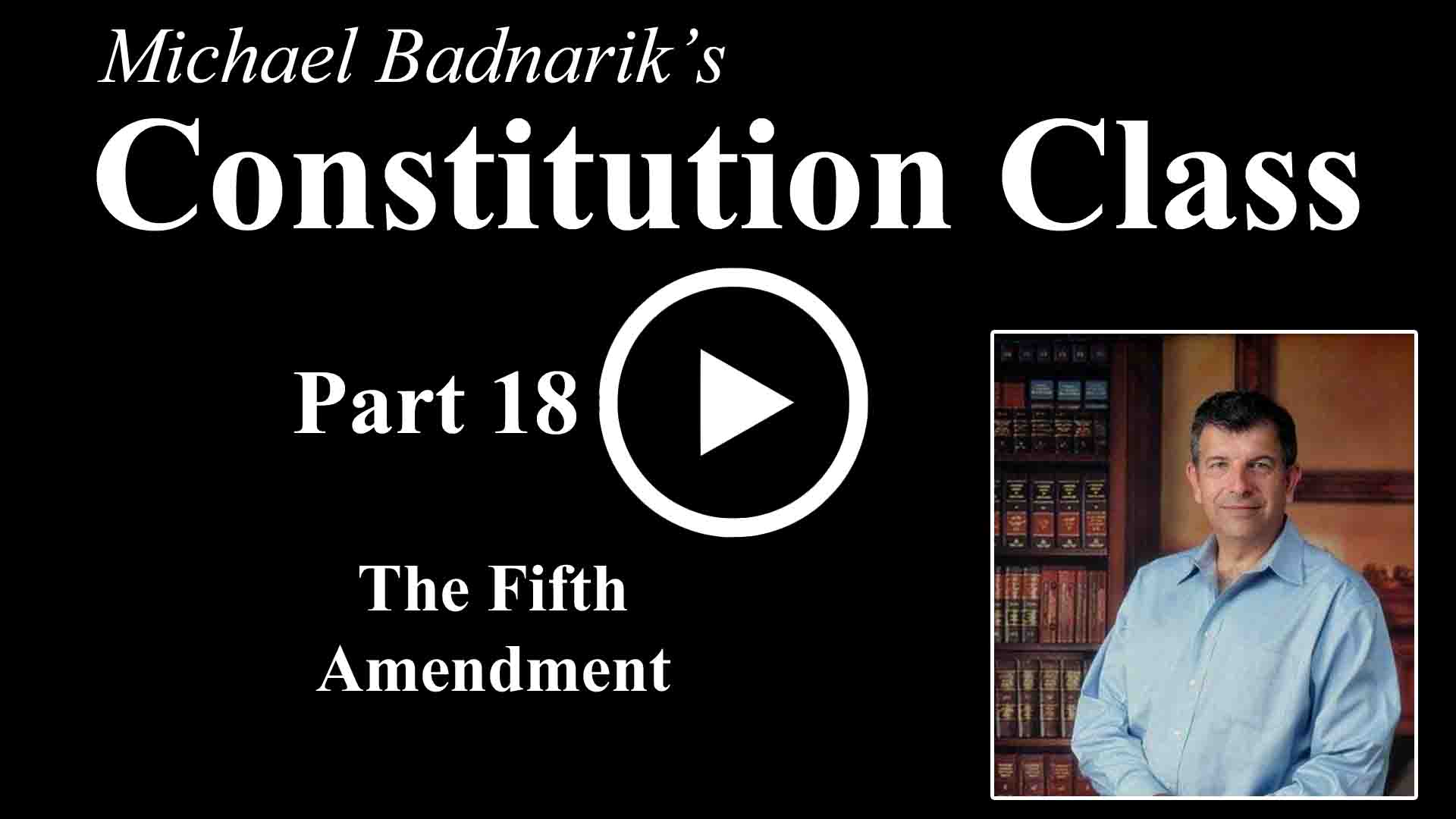 The Fifth Amendment covers double jeopardy and not witnessing against yourself. 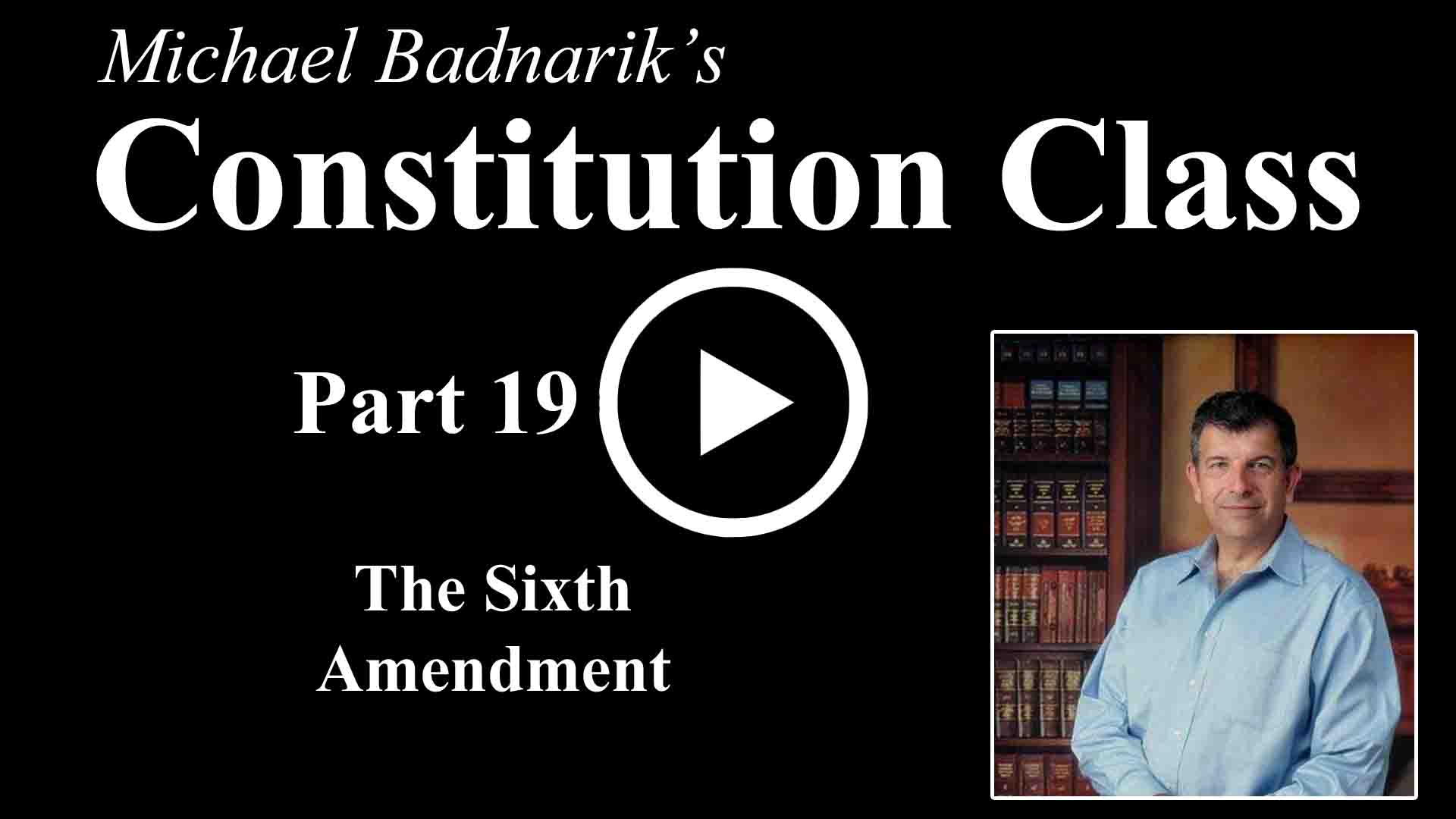 The rights of the accused in criminal cases. 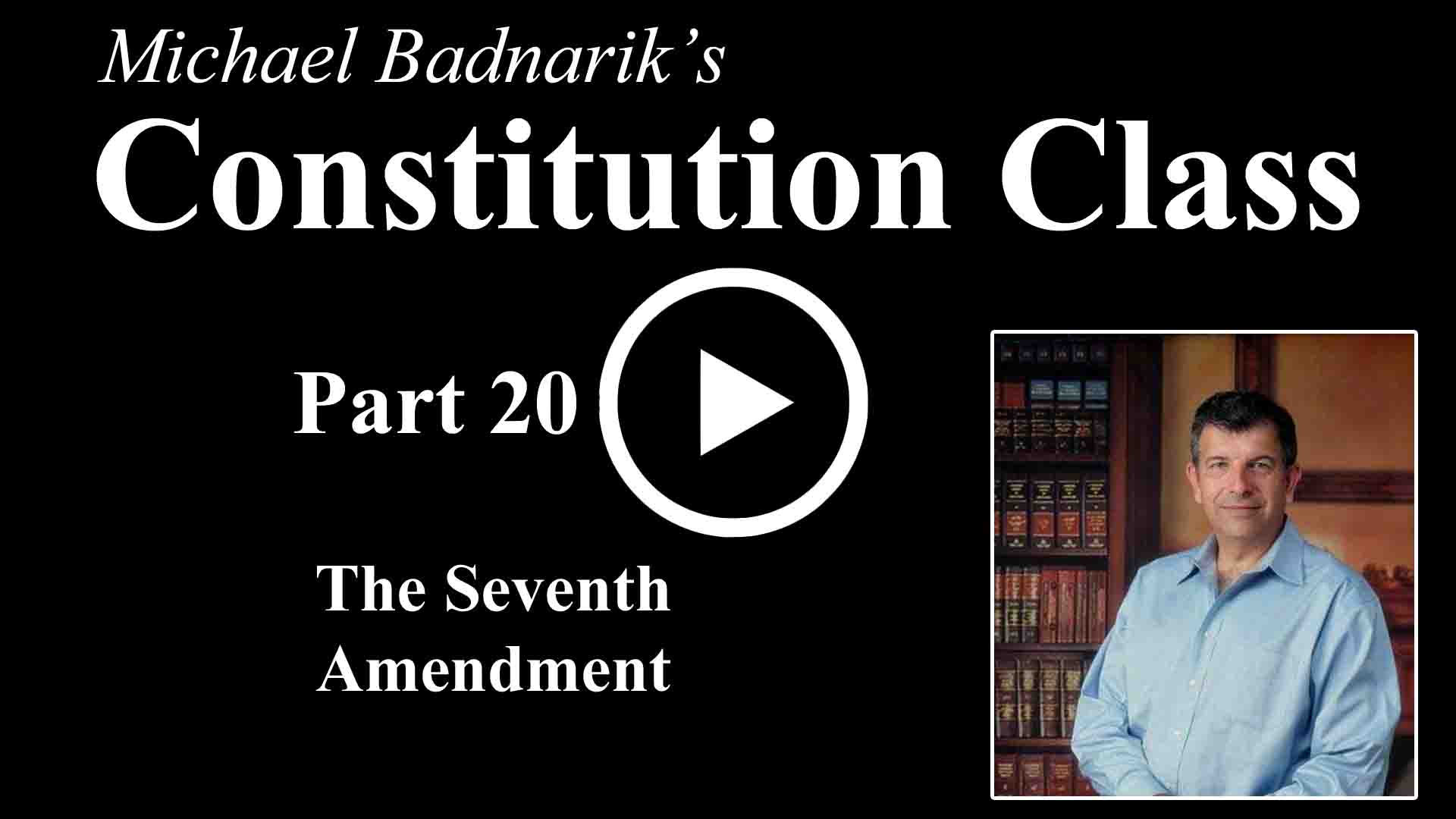 Guarantees of a trial by jury. 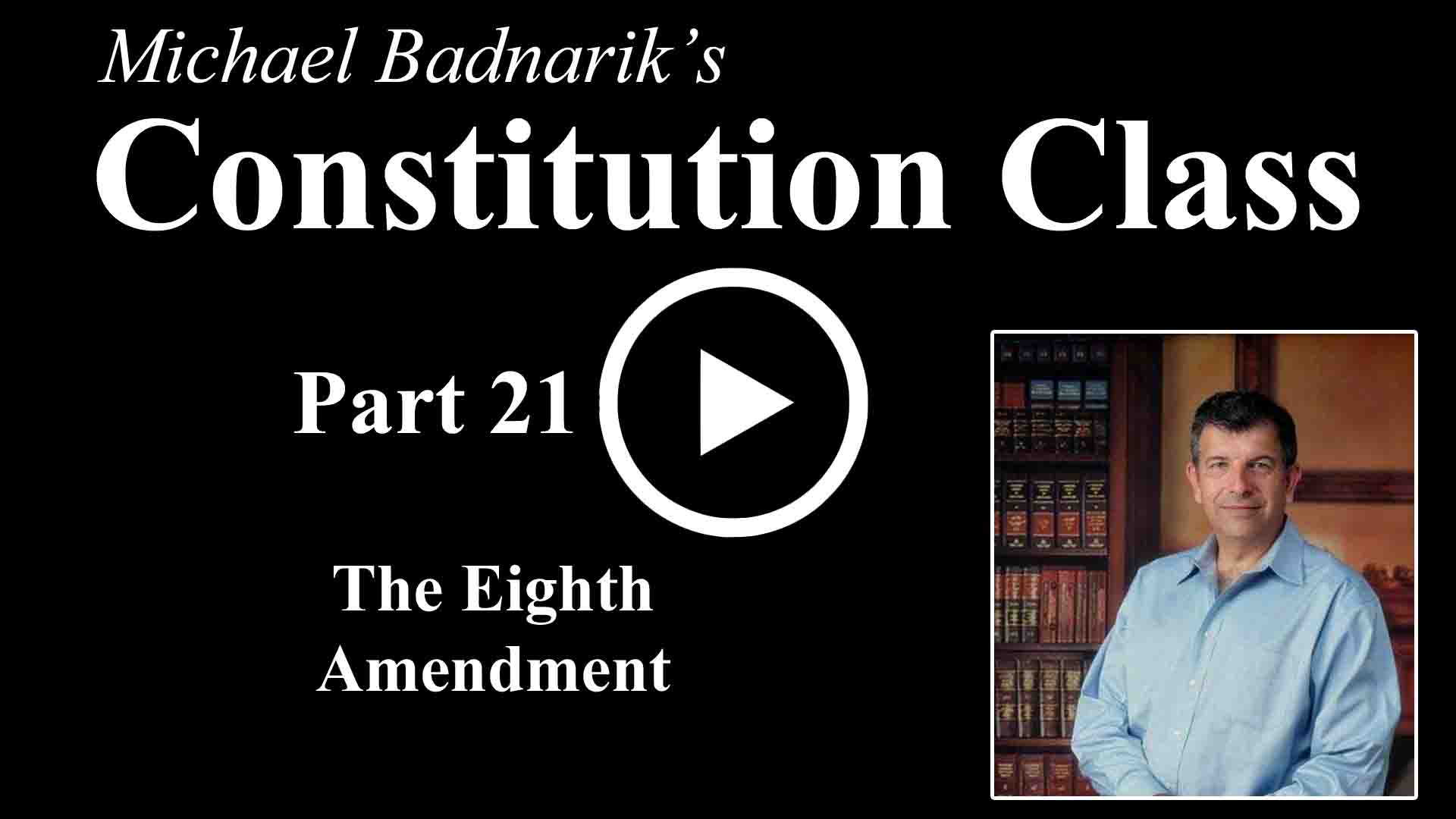 No excessive bail or cruel punishment. 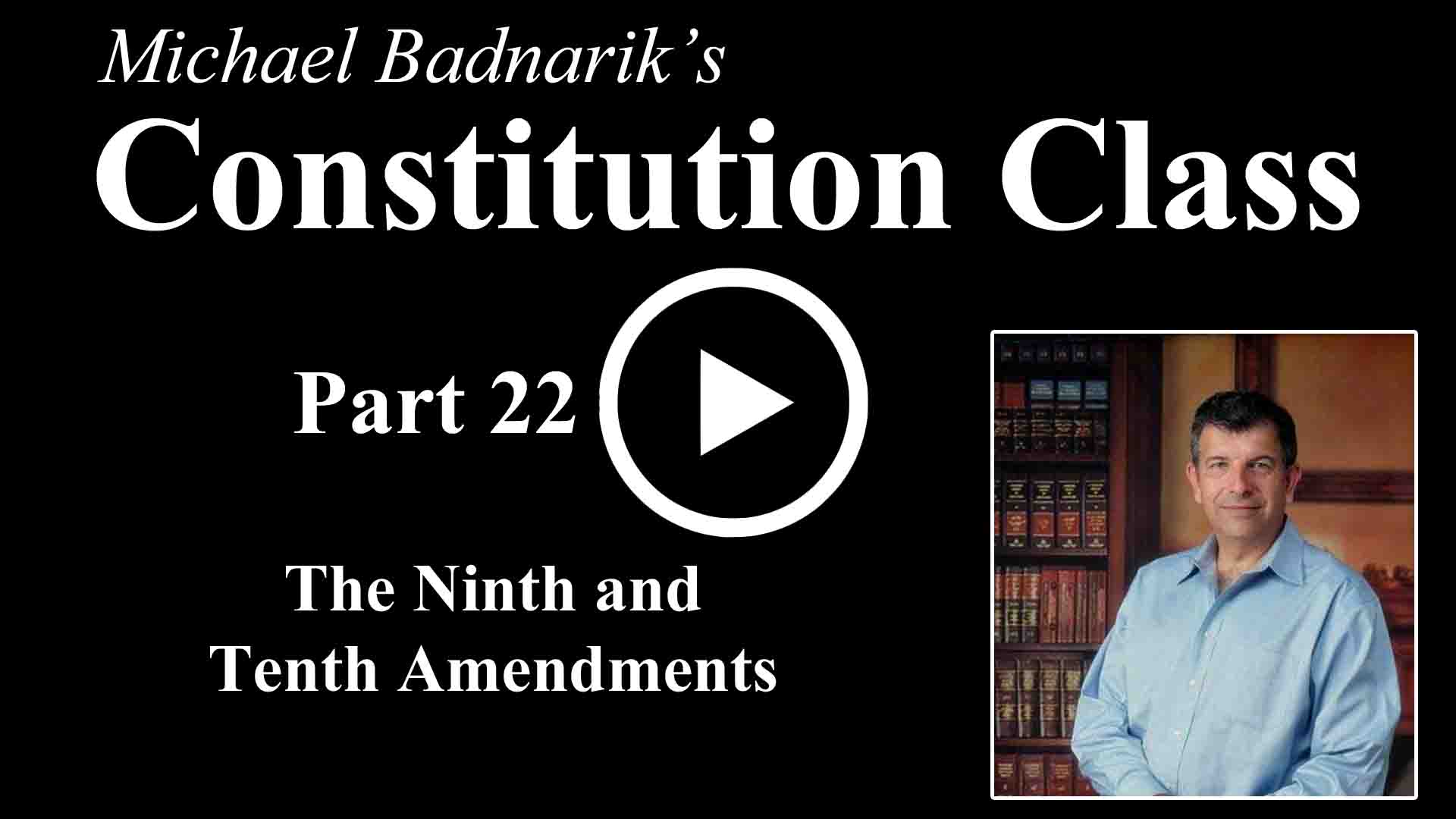 Additional rights not listed in the Constitution and any rights not given to the Federal government are given to the state and the people. The founding fathers had good reason to pen the Tenth Amendment. The issue of power – and especially the great potential for a power struggle between the federal and the state governments – was extremely important to America’s founders. They deeply distrusted government power, and their goal was to prevent the growth of the type of government that the British had exercised over the colonies. A number of well-known patriots including Patrick Henry, Samuel Adams, Thomas Jefferson, and others opposed adoption of the Constitution. They passionately argued that the Constitution would eventually lead to a strong, centralized state power which would destroy the individual liberty of the People. Many in this movement were given the poorly named tag “Anti-Federalists.” The Tenth Amendment was added to the Constitution largely because of the intellectual influence and personal persistence of the Anti-Federalists and their allies. It’s quite clear that the Tenth Amendment was written to emphasize the limited nature of the powers delegated to the federal government. In delegating just specific powers to the federal government, the states and the people, with some small exceptions, were free to continue exercising their sovereign powers. When states and local communities take the lead on policy, the people are that much closer to the policymakers, and policymakers are that much more accountable to the people. Few Americans have spoken with their president; many have spoken with their mayor. Adherence to the Tenth Amendment is the first step towards ensuring liberty in the United States. Liberty through decentralization. 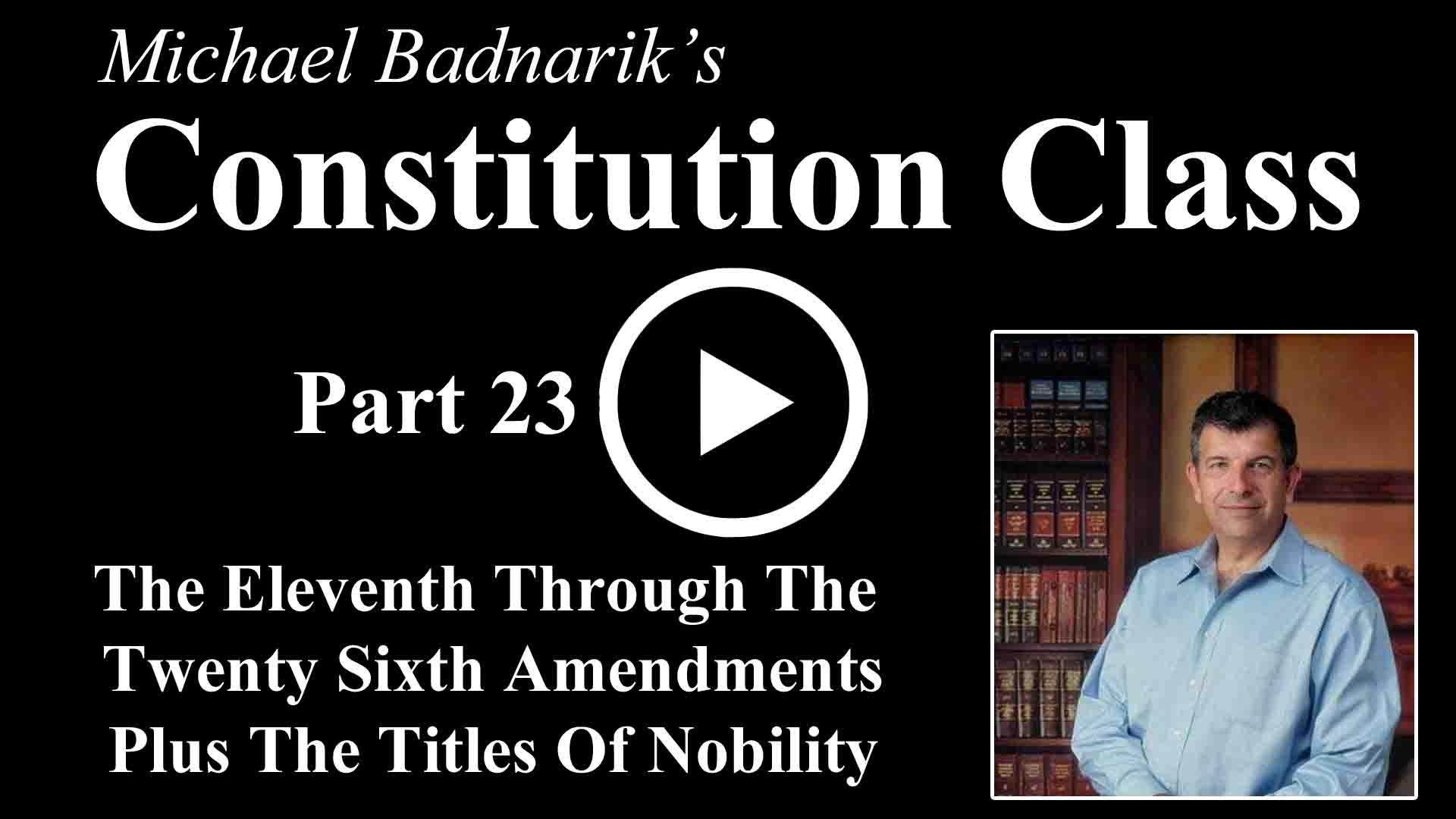 Part 23:  The Eleventh Through The Twenty Sixth Amendments Plus The Titles Of Nobility

The Eleventh through the twenty sixth amendments are: Individuals cannot sue a state in a federal court, separate ballots for president and vice president, abolition of slavery, if you are born or naturalized in the U.S. then you are a citizen of the U.S., you cannot prevent a person from voting because of race, color or creed, the income tax, popular election of U.S. Senators, prohibition, women get the right to vote, president takes office on January 20th instead of March 4th, repeal prohibition, president can only serve two terms, Washington D.C. residents can vote for president, anti poll tax, how president turns duties over to V.P. due to illness, 18 year old’s get to vote, Congress cannot accept a pay raise until the next term. 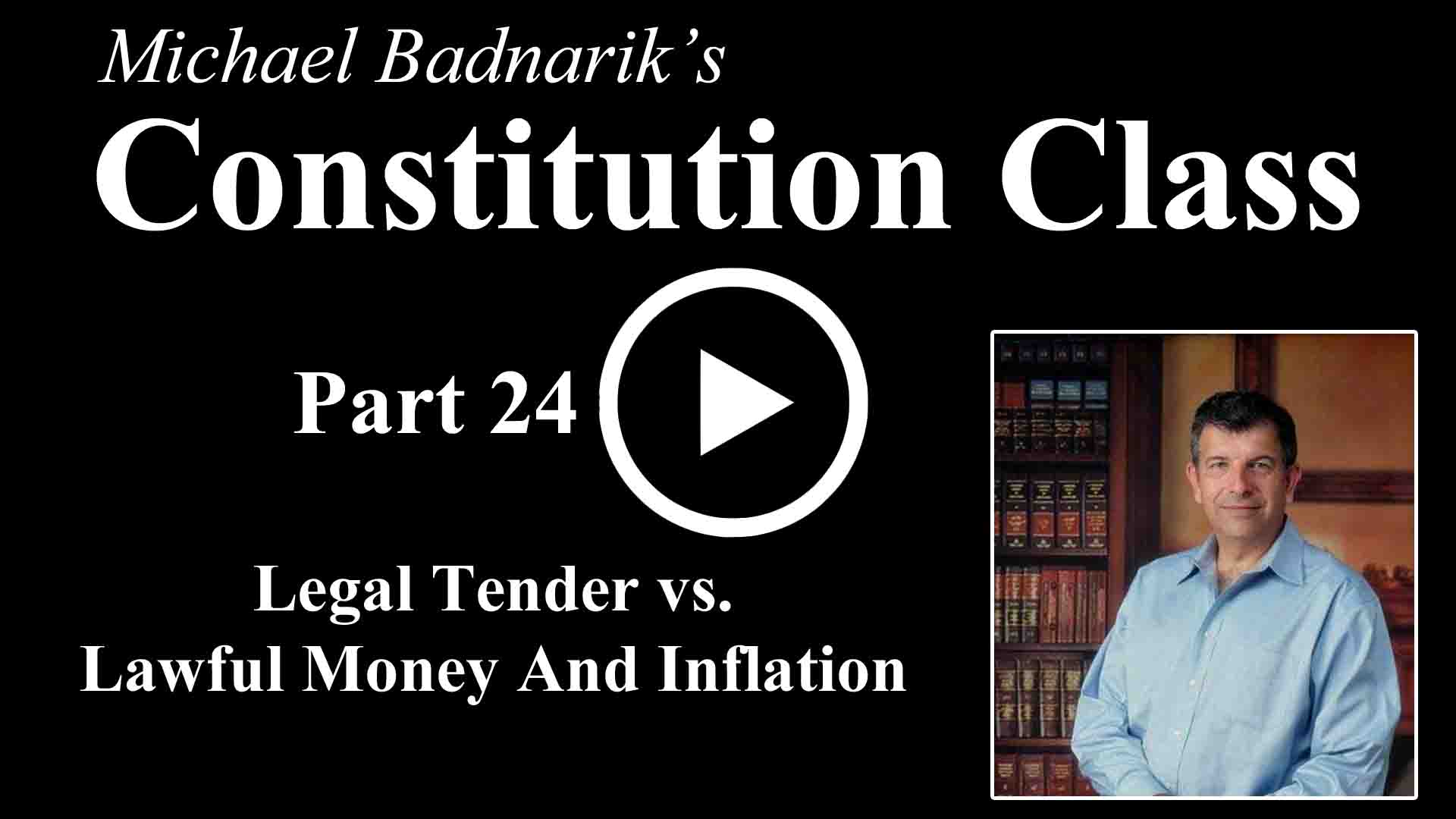 Mr. Badnarik explains the differences between lawful money and legal tender. He also goes into the explanation of inflation. It was the reason why America changed from the Articles of Confederation to the Constitution in the first place. The nation’s money is the key to its success. 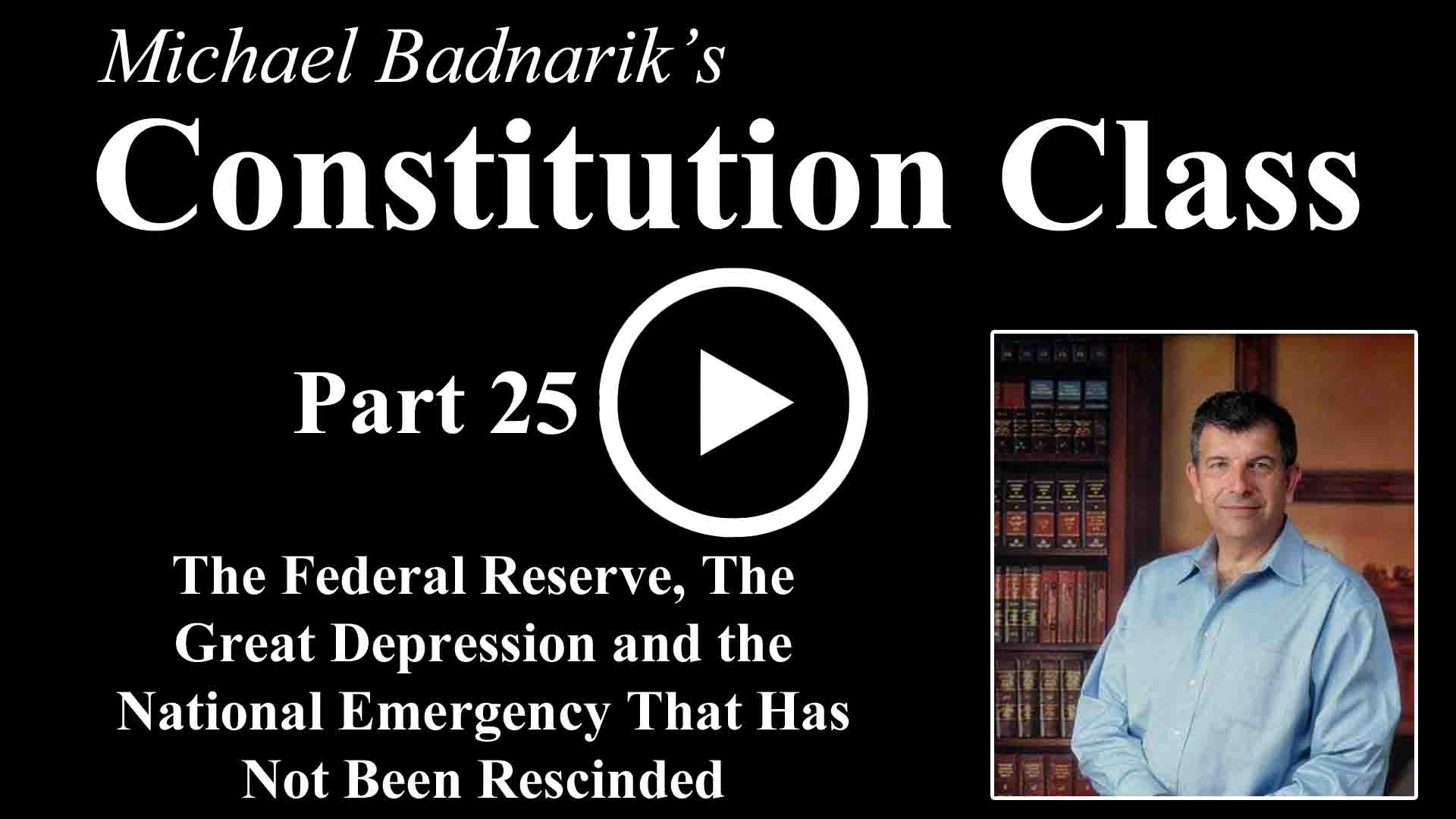 Part 25:  The Federal Reserve, The Great Depression and the National Emergency That Has Not Been Rescinded 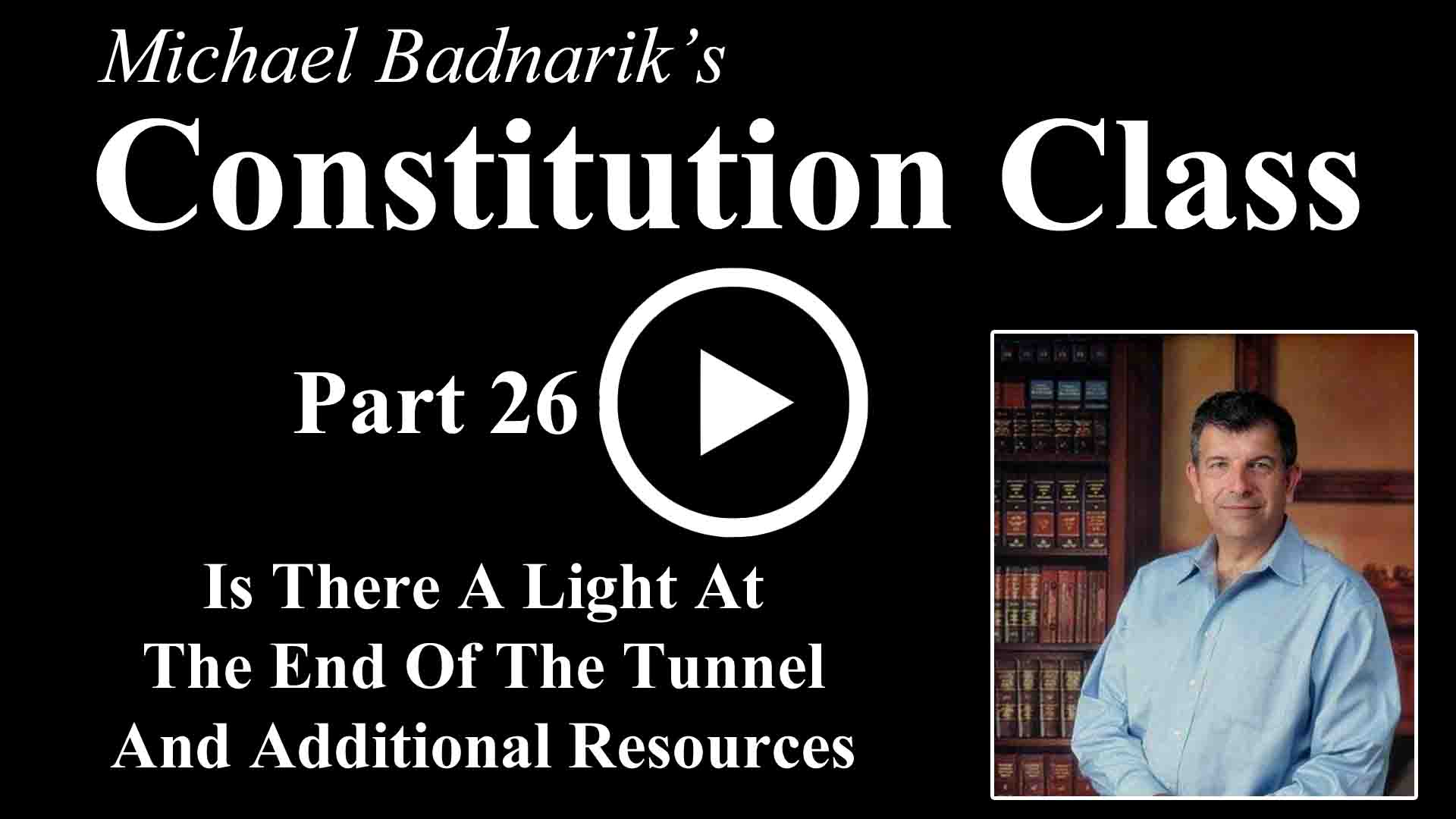 Part 26:  Is There A Light At The End Of The Tunnel And Additional Resources

Mr. Badnarik explains if there is any hope of us ever returning to the limited government of our Constitution that the founders gave us and suggests several books and videos for further study.